It has been three months since our last update and three years since we found out Hillary had Idiopathic Aplastic Anemia. She remains in recovery with below normal neutrophils, stable hemoglobin, and high platelets.

Hillary would ask about ringing the bell every time she’d walk by it on her way to treatment. It was her way of holding onto hope for her future. Her survival. She had planned the most magical party afterwards with her doctors and everyone she knew and loved at her favourite Mandarin Restaurant with cotton candy, panda bears, and egg rolls. But when the pandemic hit, that dream disappeared.

We continue to go to great lengths to protect Hillary’s immunocompromised state. The sacrifices are many, but we are committed to keeping her off the transplant path as long as possible. Our hospitals are overwhelmed and we are struggling more and more to find adequate accommodations outside of the hospital for timely tertiary care.

Hillary’s outspoken wish is to ring the bell at home.

Her treatment was highly successful and she wishes to preserve that as best she can by remaining in isolation. Her doctors and nurses understand. They know Hillary personally and know this is what she wants. She wants to stay true to herself.

But what bell then? And how? While honoring her request, I wondered if there was a bigger opportunity for some change that might benefit others in her situation. Many patients are never even offered the opportunity to ring the remission bell in the oncology department, despite spending years in and out of the hospital fighting for their life. Children with mental health challenges, eating disorders, accident victims, and trauma survivors. Children with rare conditions enduring years of immunotherapy.

Warriors like Hillary don’t have cancer. They have a rare disorder of unknown etiology. They may never reach remission. Their diseases aren’t listed beside a checkbox on an intake form. They don’t qualify for any of the financial bursaries or life-changing programs available to those with cancer, despite often receiving the exact same medical treatment and grim prognosis.

Every child deserves a chance to commemorate their medical recovery. Their perseverance in the face of adversity. Their bravery and courage.

We are deeply and truly honored to share that we are donating to CHEO, through its Foundation, their first ever outdoor Celebration Bell, sponsored in part by the Rotary Club of West Ottawa ⁠— for all children in recovery, and their families.

We built the Celebration Bell as a family and Hillary will be the first child to celebrate by ringing it in our backyard on June 23 on Facebook Live. Alyssa made the invitation and Hillary has already written her speech and she will make you so very proud. Her 9th birthday will follow three days later. We will then donate the monument for installation in The Little Garden at CHEO, with a view from the President’s office, Alex Munter.

Alex showed up in the hospital room during those first five days on the fifth floor when we were tumbling down the rabbit hole trying to arrive at a diagnosis. He showed up at our first bone marrow drive and stood with us as we shook hands. He shows up on Twitter.

The very first time I met him, he said something that stuck. I’ve come to learn that he did not coin the term, but he references it often and, for me, it belongs to him. He said to me, “Every child deserves someone whose eyes light up when they enter the room.”

It is our solemn wish that the Celebration Bell serve the diverse children in our community — and their families — who are facing unspeakable health challenges in uncertain times. May our eyes light up with joy and pride as we watch them celebrate their miraculous achievements. 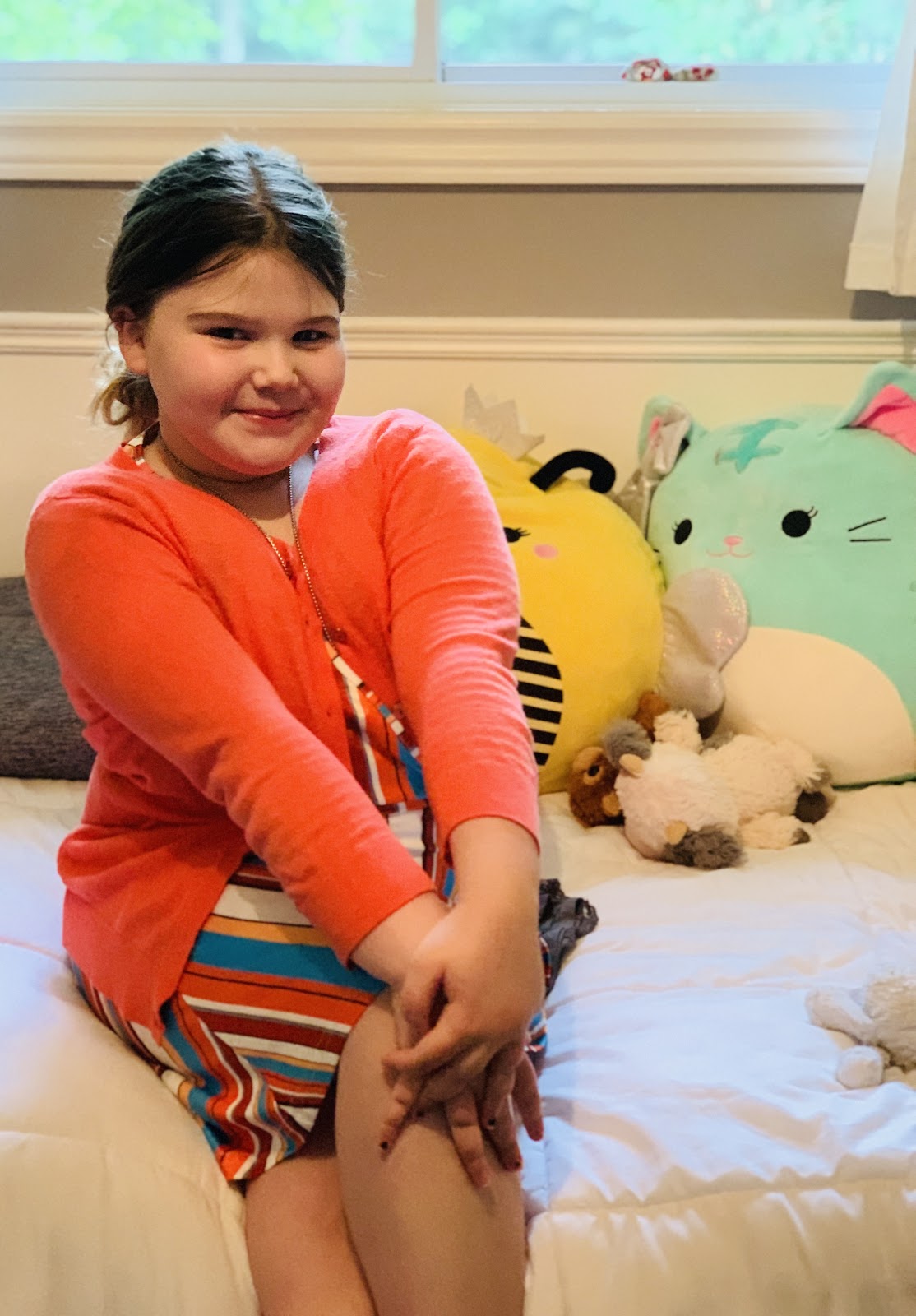 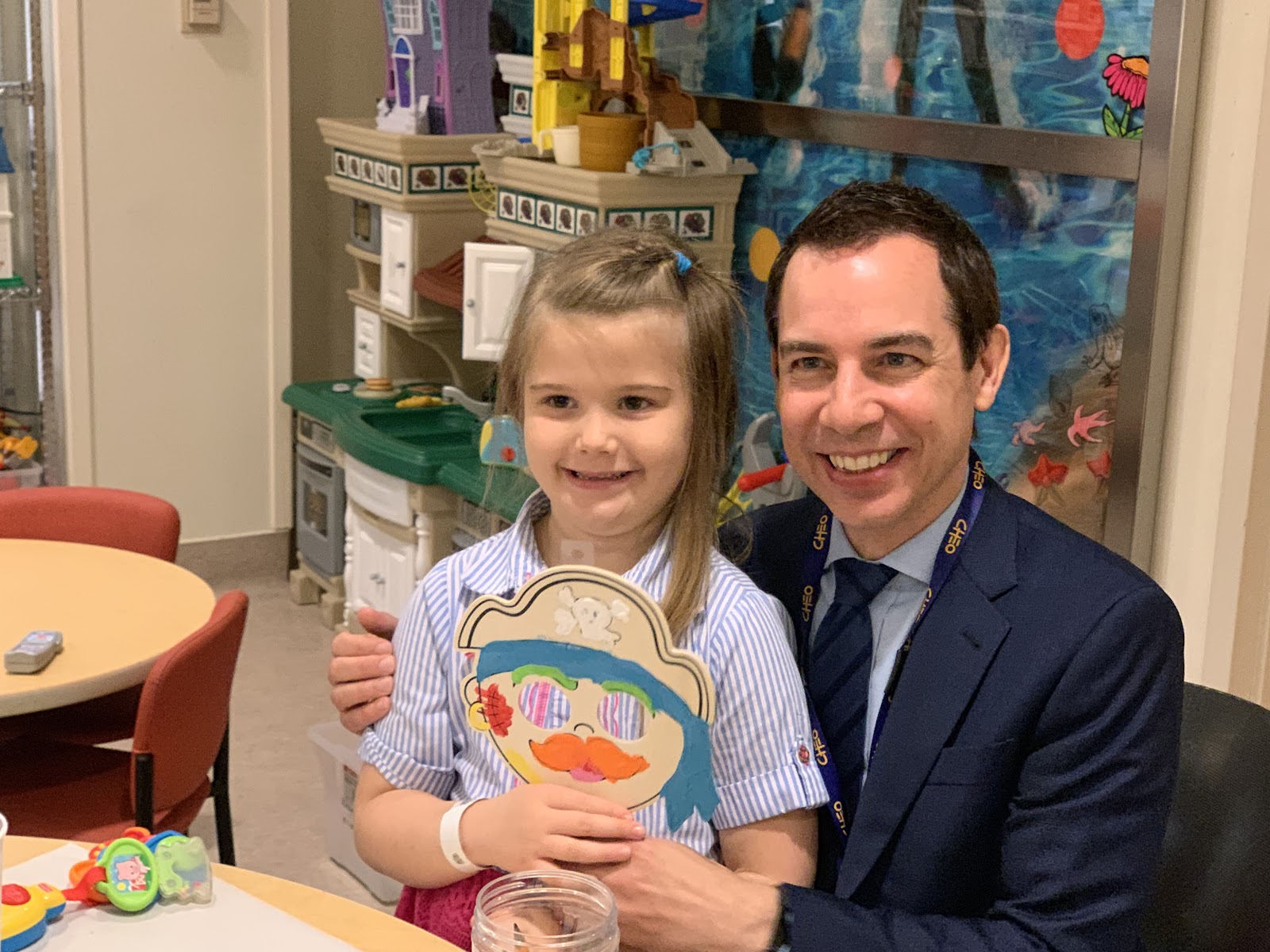 The Celebration Bell was designed and handcrafted as an original monument to serve pediatric patients at CHEO — Ottawa’s pediatric hospital and research centre. It aims to serve a variety of patients with differing diagnoses, and their families, celebrating medical achievements. The Celebration Bell can be accessed under relaxed conditions in the outdoor CHEO Little Garden. 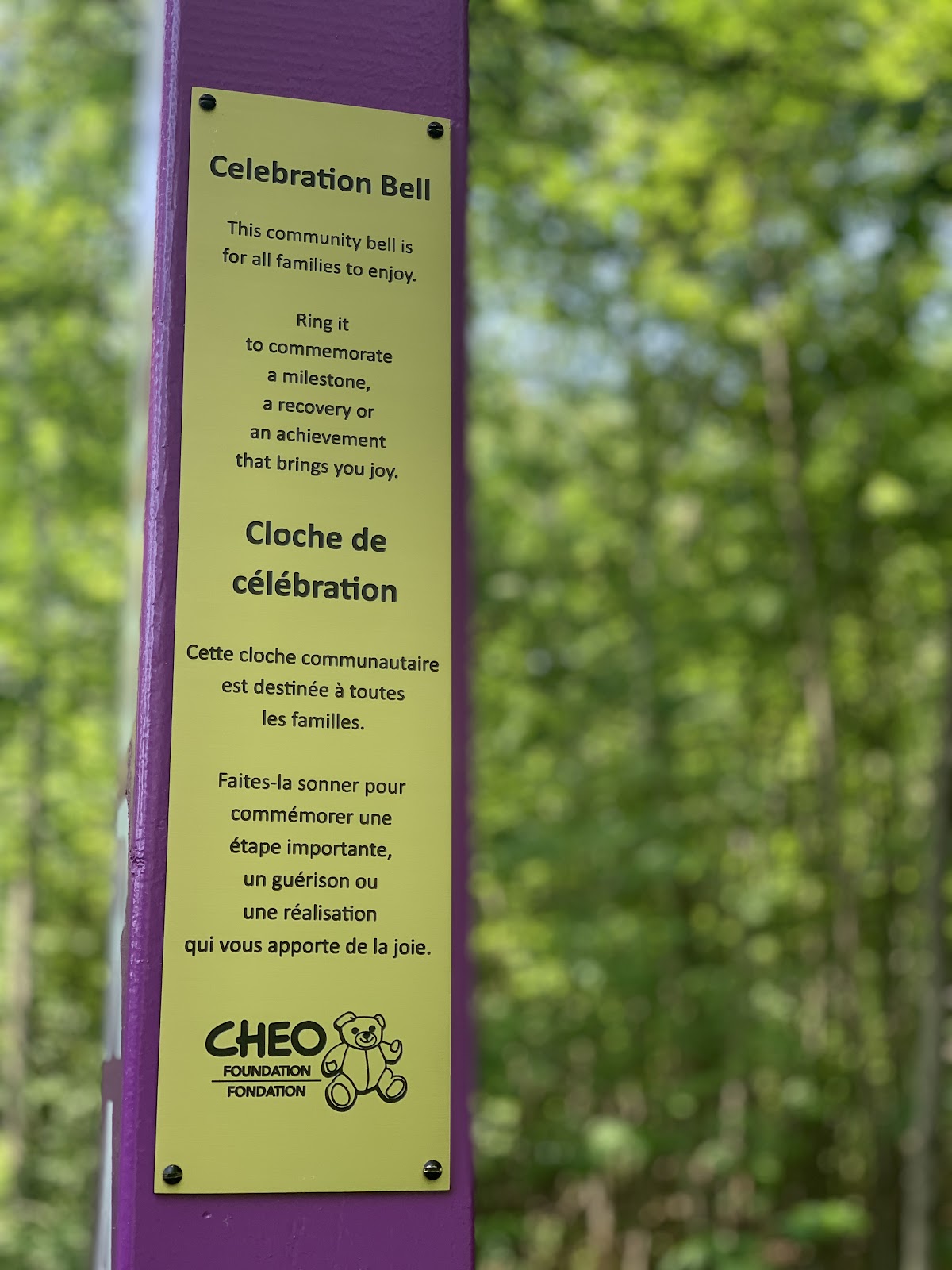 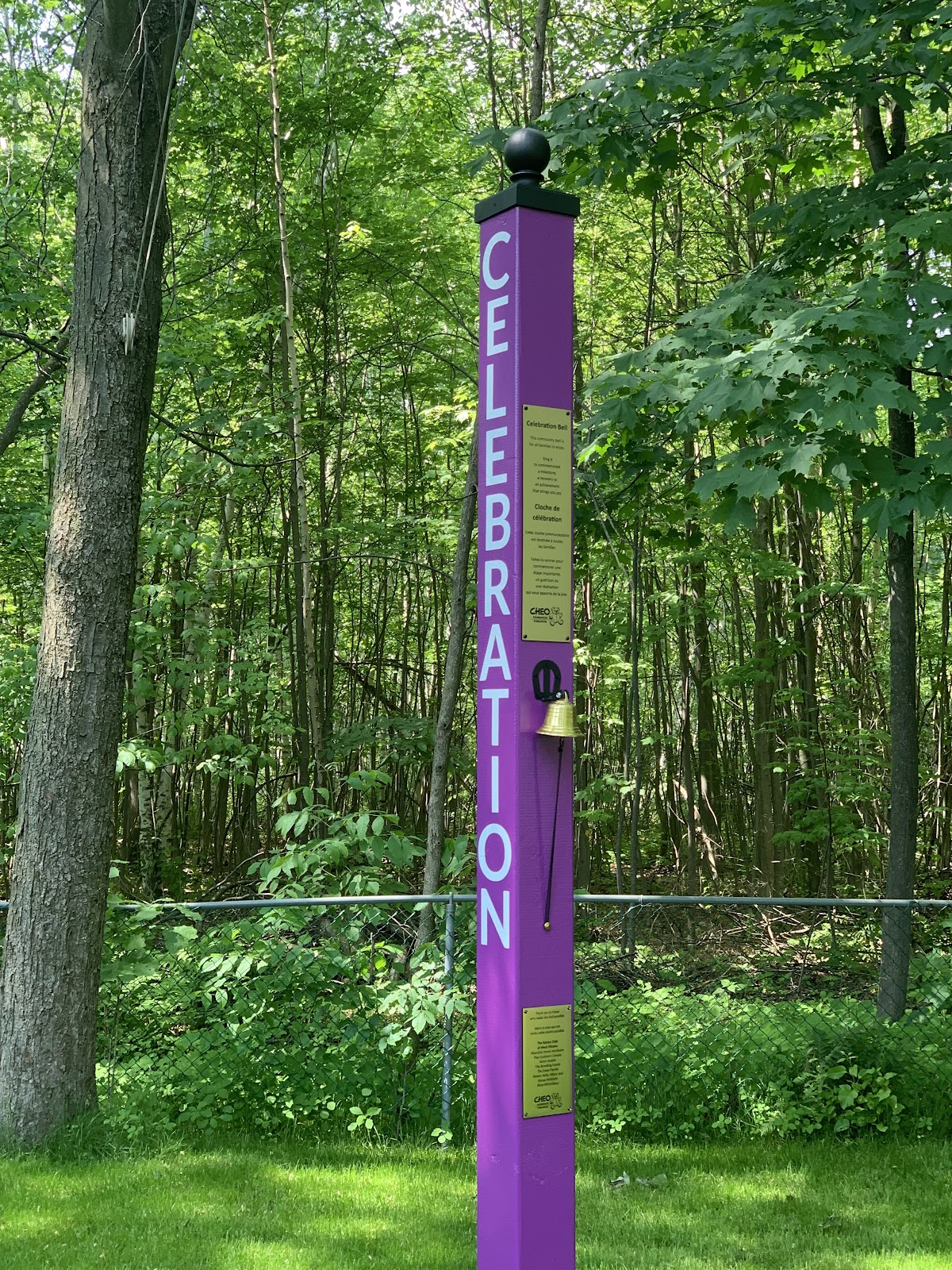 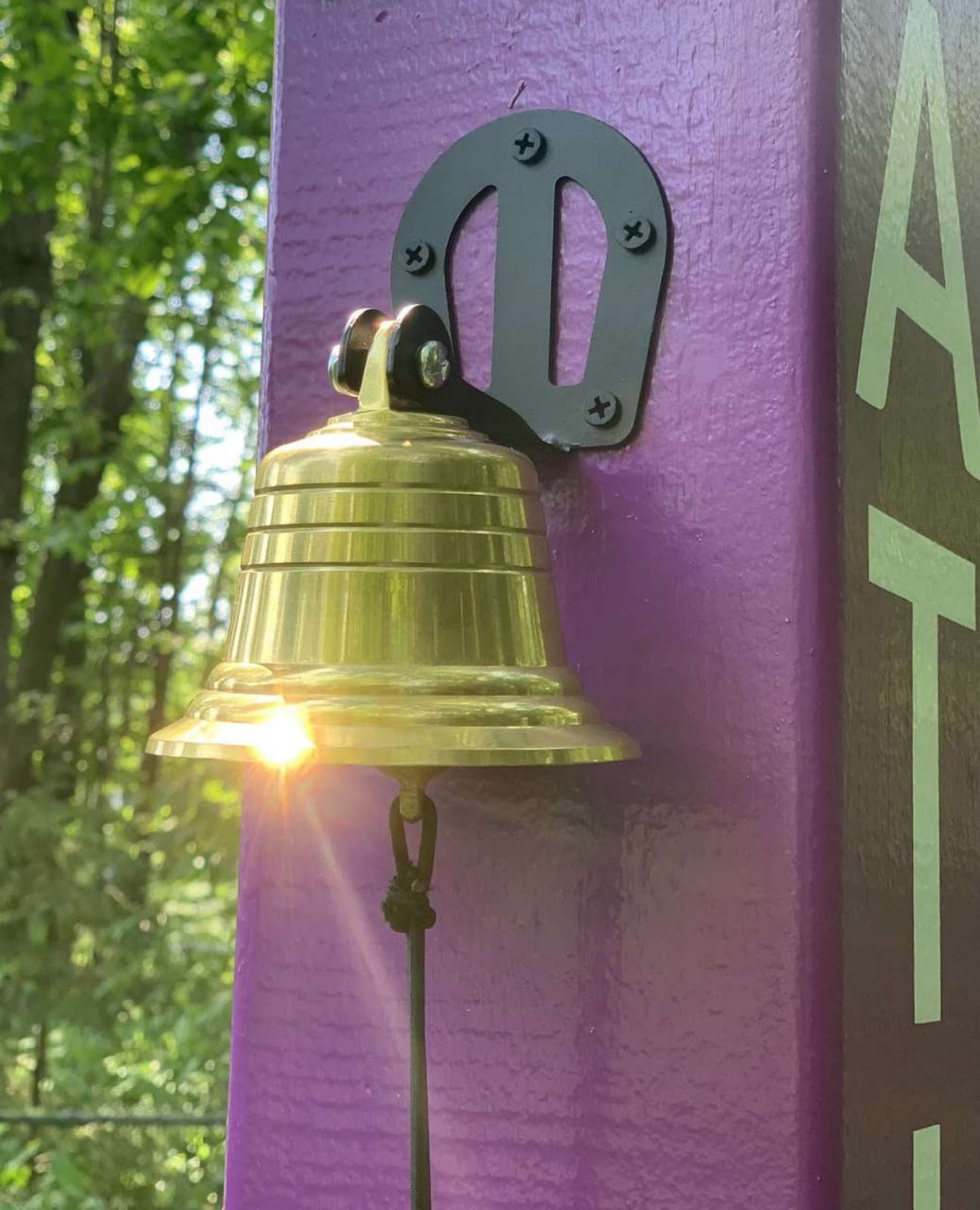 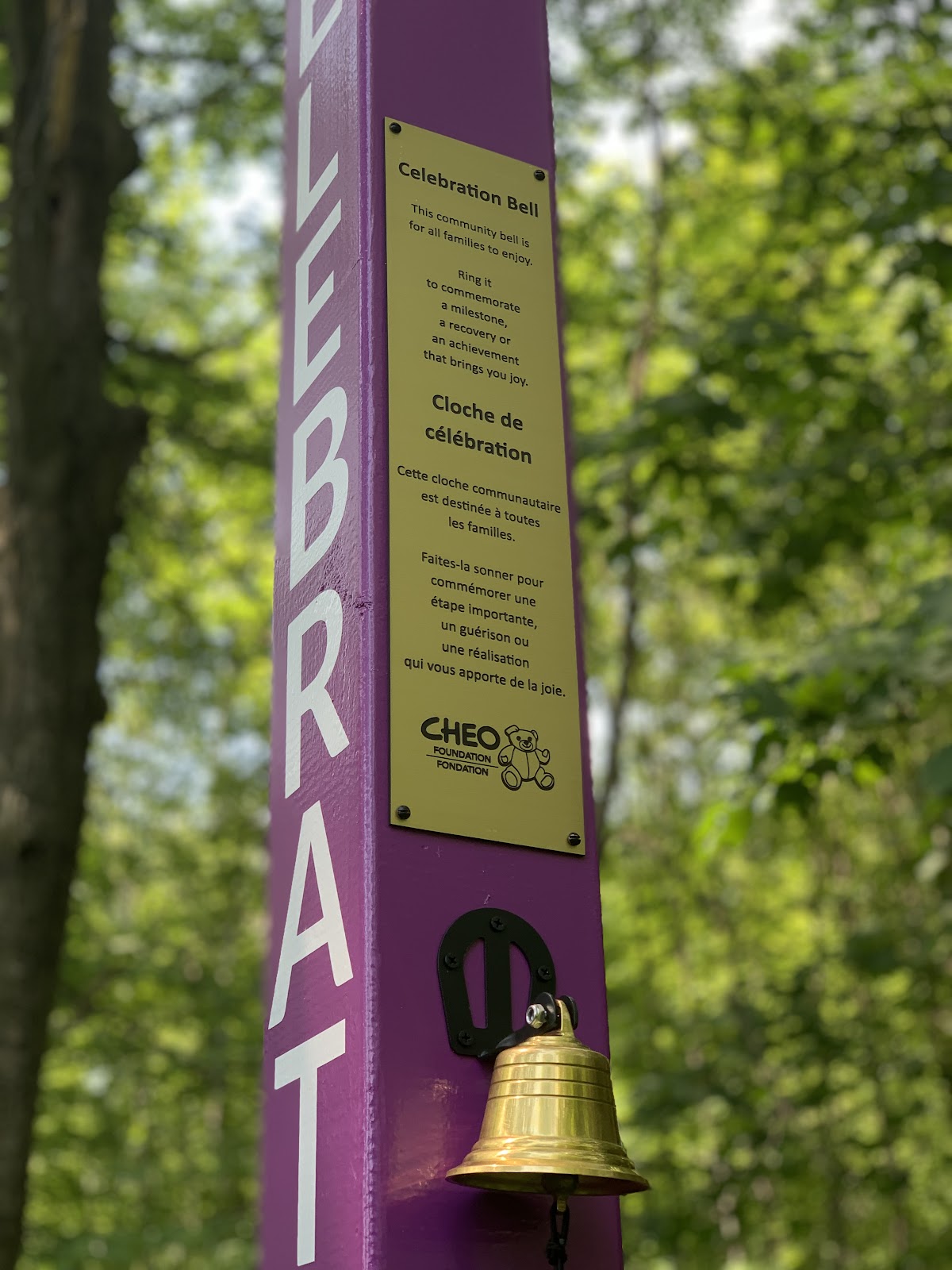 The Celebration Bell is sponsored in part by the Rotary Club of West Ottawa (RCWO), a “group of men and women dedicated to the principles of Rotary united in the ideals of service and fellowship.” This organization reached out to help us during our time of financial strain while dealing with our child’s illness. Their mandate is noble, and once I read their 4-Way Test, I knew they were the perfect partner.

Thank you President Graeme Fraser for straining your budget to serve the children in our community. This is a joyful addition to the list of projects that the RCWO is involved with.

The project involved several business and community partners. The Celebration Bell was handcrafted with great care, admiration, and love for CHEO and its community. Inclusivity and accommodation served as the main inspirations for this project.

Thank you to Heather McDonnell, Manager of Home Hardware Manotick for donating the colour-matched paint for the post. Heather and her staff have provided exceptional customer service to patrons in our community during pandemic restrictions. Thank you Heather for caring and leading an excellent team of conscientious employees.

Thank you to Brent Bigelow, Owner of PlayOutdoors Canada (a subsidiary of JungleGyms Canada) for donating the solid brass bell. I purchased 20 bells of all different metals from all over the globe until I finally came across Brent’s solid brass bell — designed just for kids, and available right here in Canada. One phone call and Brent understood. He allowed an exception for the charitable use of the bell for this project. Thanks Brent. It’s beautiful.

Thank you to Karen Asselin, Community Member for creating the vinyl Celebration/Célébration letters. Karen works at KJP Select Hardwoods and I called to ask a zillion questions. Karen had a great deal of patience with me as I changed direction too many times. Thanks for sticking with me Karen. It turned out great.

Thank you to The Brooking Family for supporting the project and our family. Nicole Brooking was Hillary’s Kindergarten teacher and has played an integral role in Hillary’s survival. Her and her husband Brett, with their three sons, have helped us daily since this all began. Thank you for connecting us with the RCWO, and for supplying the beautiful fresh flowers for Hillary’s celebration. The rest is just way too much to list.

Thank you to The Essex Family for their unconditional love for us and CHEO. Douglas and Estelle — my parents and Hillary’s beloved Nana and Baba — are there for every appointment, every test result, and every milestone. They are there for us on the difficult days too, and that has been both inspiring and helpful to our children. This includes my brother William Essex, his wife Shannon, and their two sons, Cole and Dylan. Thank you for helping us complete this gift to our community.

The project took over six months to conceptualize, design, and handcraft. Thank you to my husband Steven McKibbin for showing respect for the process and painting and varnishing the post with such great care and patience. Thank you my darling Alyssa McKibbin for your photography, photo editing, and engineering expertise. I’m so proud that you understand the importance and value of giving back. This was a family project. Hillary was the inspiration. We are all very proud about of how it turned out.

The Celebration Bell was designed and handcrafted by Kelly McKibbin for CHEO to serve its diverse community of patients and families. Careful consideration went into supporting the longevity of the monument.

The post is made of Sienna pressure-treated wood to best withstand freeze-thaw and wet-dry cycles. The post measures 6”x6” by 10’ long, with the bottom 3’ to be cemented underground in a post hole with a diameter of at least 12”. The post was sanded, primed, and painted with an outdoor, rustoleum paint color-matched to the CHEO brand. Three coats of varathane were applied to seal the post and its vinyl letters.

The vinyl letters on the right and left sides of the post spell “Celebration / Célébration” in 4” white Lato font.

The post cap is an aluminum ball with powder coat finish.

The bell is made of solid brass, affixed to the post with a secure mounting bracket and stainless steel screws treated with thread locker to prevent loosening. Brass is the customary choice due to its ability to withstand rust and corrosion, its historical relevance, and its superior sound quality.

The pull cord is a polyester/rubber blend cord elastic, and is located within reach of paediatric patients (between 2.5-4 feet). The cord is secured to the post using a screw with a protective cap to prevent inadvertent or unwanted ringing when not in use.

The dedication on the Intention Plaque reads:

This community bell is
for all families to enjoy.
Ring it to commemorate
a milestone, a recovery,
or an achievement
that brings your joy.

Thank you to Perkins Home Building Centre in North Gower. Although my family paid for the post, we still wouldn’t have bought it anywhere else. Thanks for maintaining excellent quality standards.

Thank you Ottawa Brass for producing the plaques and working through numerous proofs over several months. I will keep this extra brass plaque with Hillary’s name misspelled as a keepsake. She says Hill-i-ary sounds good, too. It will go well with the 19 extra bells I have.

Thank you Dawn Pickering, Ollie’s mom. Dawn told me this would work when I wasn’t sure. This encouragement was very helpful. I will work on a Braille plaque, Dawn.

Thank you Sandra Naufal, Retired OCSB Teacher for offering your creativity and kindness.

Thank you Lauren Rocque, friend, for helping edit all of my thoughts and words. I make mistakes. Thank you for believing in me always.

Thank you CHEO and the CHEO Foundation, for approving this concept and guiding the project with compassion, care, and patience during a ongoing pandemic, city-wide protest, record-breaking power outage, and numerous successful CHEO campaigns of your own. You are the heartbeat of this city. Thank you for saving our children.

The poem Ringing Out written by Irve Le Moyne in 1996 — a rear admiral in the U.S. Navy — served as additional inspiration for this project. Le Moyne was undergoing radiation therapy for head and neck cancer and told his doctors at MD Anderson Cancer Center in Texas that he planned to follow a Navy tradition of ringing a bell to signify “when the job was done.” He brought a brass bell to his last treatment, rang it several times and left it as a donation. It was mounted on a wall plaque in the Main Building’s Radiation Treatment Center with the following inscription:

Ring this bell,
Three times well,
Its toll to clearly say,
My treatment’s done,
This course is run,
And I am on my way!

This poem and tradition have been adapted all over the world to commemorate medical achievements in a wide variety of disciplines, from physical therapy to stem cell transplantation. The inscription on the CHEO Celebration Bell’s Intention Plaque was crafted with Le Moyne’s tradition in mind.

Numerous editorials and research studies have explored the advantages and disadvantages of hospital remission bell traditions. Some studies purport that ringing the bell creates more distressing memories for the patient. Some hospitals have banned remission bells altogether, citing complaints from patients feeling hopelessness due to their ongoing prognosis, and complications caused to hospital processes.

After conducting a thorough, online, global environmental scan regarding the use of hospital remission bells, this project confidently supports the conclusion that the benefits for patients — particularly pediatric patients — seems worthy of continuing the tradition for those who opt to participate. In fact, modifying the traditional oncology remission bell to an outdoor Celebration Bell for general community use might better serve the needs of an evolving, diverse population.