“A dream is the fulfilment of a wish”

From a medical standpoint, not much has changed for Hillary since last month’s update.

She did not require a blood transfusion last week and her levels remain the same — stable, but still aplastic — with hemoglobin at 95, platelets 114, and neutrophils .9. She continues with her pentamidine infusion medication as a precaution until her neutrophils come up, and she begins another stage of weaning today, Canada Day, off her immunosuppressant.

But .9 is a record high for her white cells.

She continues with such a rare presentation: no major infections; no organ damage; low neutrophils; but, growing platelets. She could even do another course of ATG before a transplant, as our doctors continue to urge that an unrelated donor transplant is a last resort, especially now with the pandemic.

That rare presentation allows Hillary to give back.
To do some good.
To be a voice for others who can’t speak…or see.

And boy, does she have a voice.

Last year, while in isolation at CHEO, Hills completed a Make-A-Wish (Eastern Ontario) questionnaire. They asked her to describe and draw three wishes. Her number one wish was to ride Space Mountain at Disney World. We talked about it every single day — no days off. We watched Disney parades on YouTube for weeks and went to sleep imagining the sights and sounds we would one day take in.

We packed a bag.

It truly incentivized Hillary to work harder at getting better — affecting self care, nutrition, discipline….everything. We had promised her the world anyways, but this wish was a magical promise from someone more important than us…Make-A-Wish understood her.

Then COVID19 hit — travel was suspended and Disney closed. She never complained. When asked again, Hillary wished for “a big bag of money to give half to the homeless people…..or a camping trailer.”

Make-A-Wish couldn’t hand out a bag of cash — and the trailer was really too much for us to accept.

We had to give back.

We are so grateful to Make-A-Wish for nourishing the spirit in Hillary to be their spokesperson for their #TheGreatMAWCampout weekend campaign. They were beyond professional and understanding with our limitations as we tried our very best to represent.

It was a tough gig — we’ve already asked for blood and bone.

Yet, the girls took over another interview on CTV Morning Live and really got the message across, again. The interview was hilarious. We camped out and tweeted all weekend, and feel fiercely proud once again to have helped raise awareness for yet another cause guiding us on this journey.

It’s the least we can do.

There was a beautiful outpouring of support on social media. NHL buddy Anthony Duclair DMd Hillary a couple of times to wish her Happy Birthday. She told him #BlackLivesMatter and he appreciated that a lot.

Thank you — on behalf of the 300 children currently waiting for their wish — for camping out and making a donation in Hillary’s name. She received a card for every donation and saw all of your names, just like a birthday party. It filled her up.

Hillary was joyfully surprised on her birthday with a new tent trailer….to keep. It sounds really crazy when I type it out…more crazy when I look in the driveway. The video made by Alexandria Camping Centre to capture the moment is the most beautiful memento we could imagine.

As if that weren’t more than enough, Make-A-Wish also organized a birthday parade for Hills that evening. You 35 cars felt like 100 trains. It overwhelmed us….we screamed and cried and waved our hands in the air like we were on a rollercoaster — just like Space Mountain.

She says it was the best day of her life.

If you drove by and saw her crying, you must have come right after her former ECE drove by — Ms. D. It put her right over the edge…but they were happy tears.

For those who wore protective face masks for Hillary, please know that we still saw you as clear as day. What a beautiful gesture filled with unconditional compassion, love, and respect. Hillary noticed right away and loved it.

For those who didn’t wear masks in their vehicles while driving by, that is fine, too.

Not to wear our face masks for the parade was a difficult decision made after several family meetings over several days. Not only do we want to protect Hillary, but we want to continue to lead by example. But the parade was for Hillary. She knew it would make her overheat. We’ve experienced it all over the past year. It’s up to US to protect our family, and we were ready for all eventualities while outside, mask in hand.

Thank you for making signs, decorating your vehicle, taking that second lap to talk to Hillary, for honking, waving, smiling…Alyssa took photos of all of you…..we are working on our thank-yous. We are particularly grateful again to St. Leonard School for continuing to support Hillary on this journey.

Hillary has not left the trailer.

She takes her medicine in it and says her tummy no longer hurts. She thinks she’s all better, and we will not beg to differ.

The next appointment in three weeks is a big one — the highly anticipated bone marrow biopsy and aspirate. This look ahead (inside her marrow where the blood is manufactured) will tell us if we’re on the right track. It will also tell us if her condition has evolved. It could tell us she’s in remission.

We still have so many options, and we are still hopeful.

It’s anyone’s guess when this miracle will happen.

I don’t know what’s next.

But I do know we are indebted for life to a very long list of organizations and individuals.

No amount of campaigns can ever even that out.

Thanks Ian Mendes for affirming that. 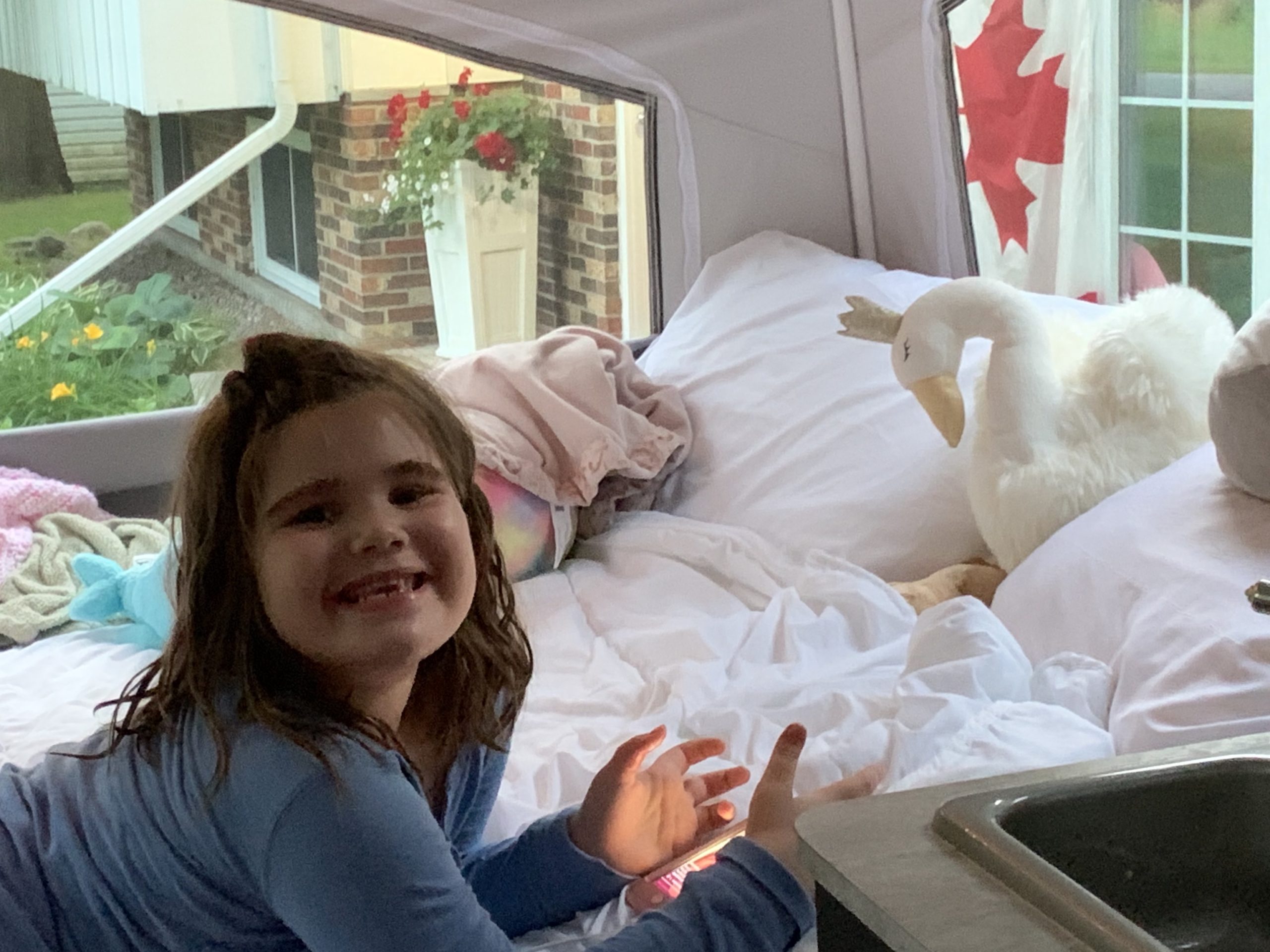 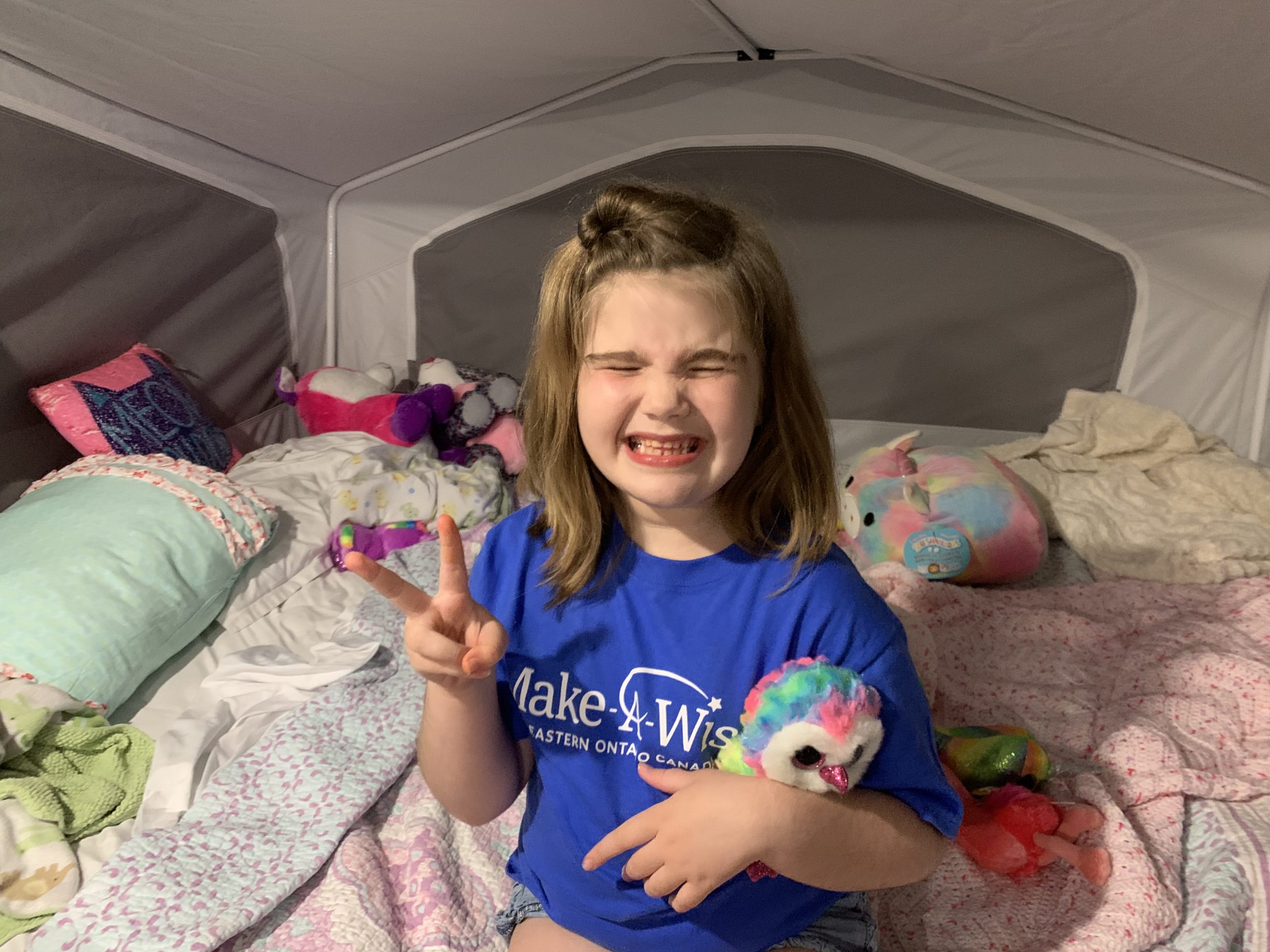 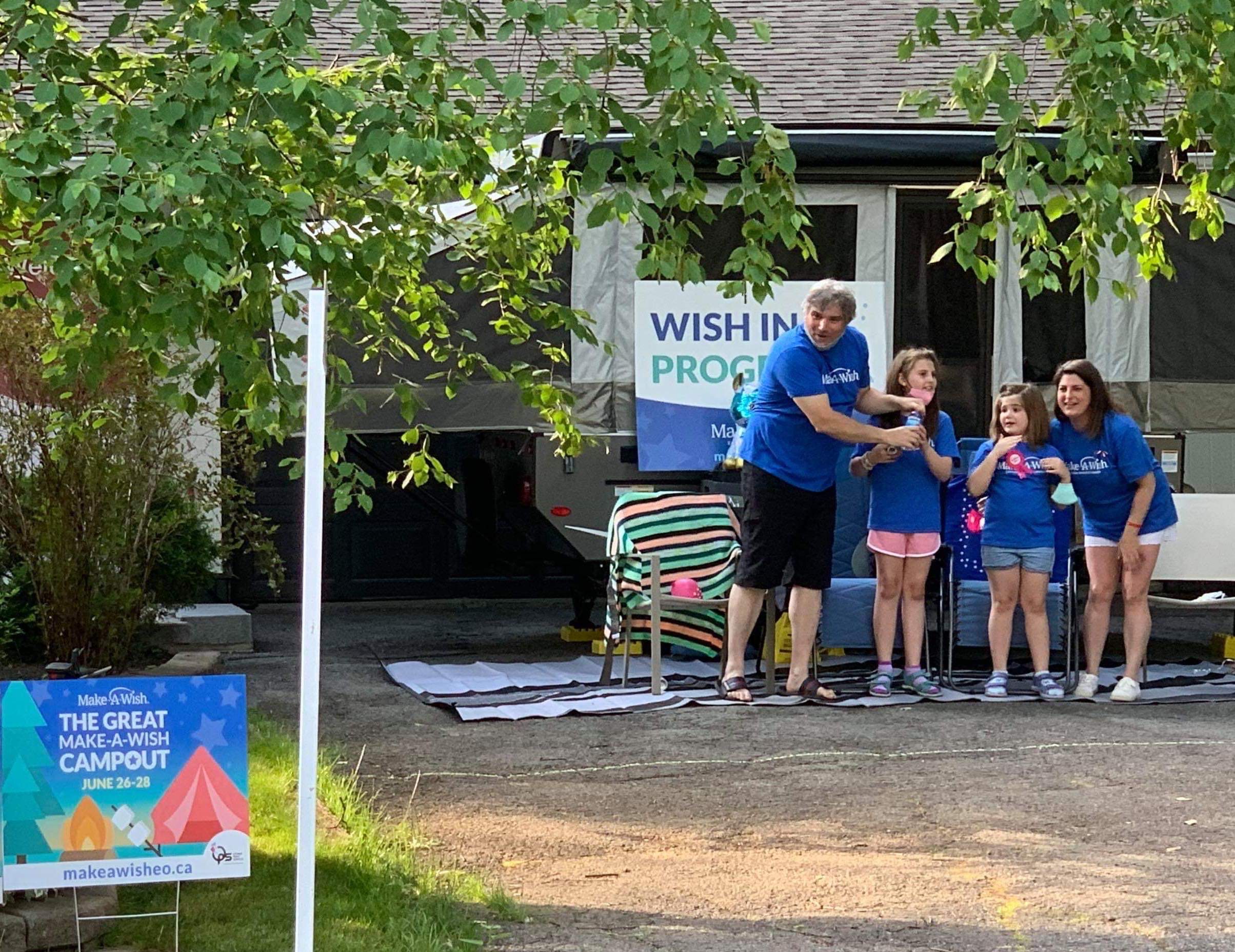 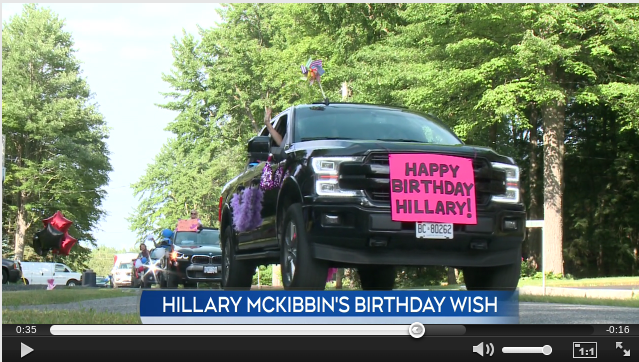 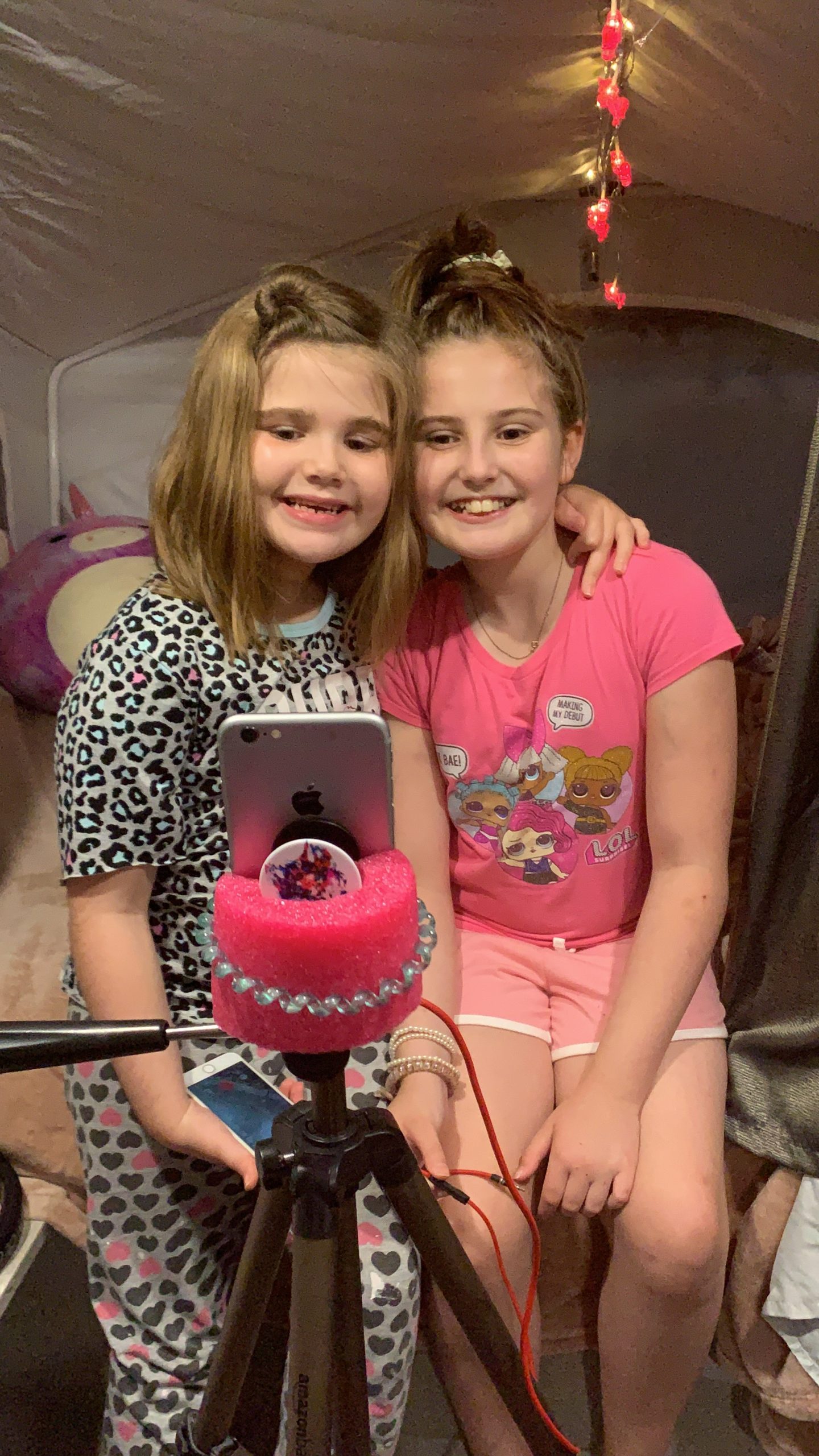 A dream is the fulfilment of a wish, Freud